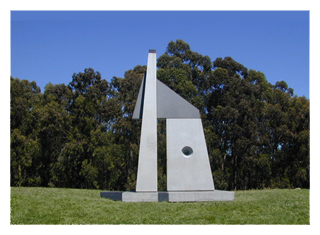 Sunstones II can be appreciated as art alone, but can also be used as an educational tool. Mr. O'Hanlon designed the sculpture. Dr. Cudaback then slightly modified it to make it astronomically useful.

HOW HIGH AM I?

The horizontal plane is represented by the flat, precisely level stone of the BASE. Using this plane, you can compare the height of visible features in the Bay Area with the height of our hillside site. Look with your line of sight just grazing the Base, towards the towers of the Golden Gate Bridge, Mount Sutro, Mount Tamalpais, or the TransAmerica Pyramid. Which are higher? Which are lower?

WHICH WAY IS WEST? The east-west vertical plane is represented by the PRIME VERTICAL STONE. Positioned directly along the east/west axis, this stone gives us a sense of that direction in relation to our Bay Area panorama. As you sight along the broad, flat side of the stone, which featrues are toward the north, and which toward the south, of true west?

WHEN DO THE SEASONS CHANGE? The small passageway between the Prime Vertical Sone and the MERIDIAN STONE comprises the Equinoctial Passage. This passage frames a view to the west. On two days of the year, the start of spring and fall (approximately March 21 and September 21), the sun will set directly in the Equinoctial Passage when viewed due west through the sculpture. These two special days are called the Vernal Equinox and the Autumnal Equinox, respectively, because on those days, day and night are equally long.

WHERE IS THE NORTH STAR? On a clear night, if you stand just south of the sculpture and sight along the slanting top edge of the MERIDIAN STONE, you will see a star which appears to remain almost fixed there, while all the other stars slowly move in larger arcs. The star is Polaris, the North Star, and your are sighting along the polar axis. That is the direction about which the Earth turns. The polar axis tells you true north, and if you measure the angle of this axis from the horizontal (bring your own protractor) you will have found our latitude on the Earth.

WINTER OR SUMMER? The large polished hole in the Prime Vertical Stone is the WINTER WINDOW. At noon, from the Autumnal Equinox (approximately September 21), throughout winter until the Vernal Equinox (about March 21), the sun will shine through this hole, and fall on the base below. The other half of the year, from spring through summer, the noon sunrays will not pass through. We are marking the sun's passage above the southern hemisphere in fall and winter, shifting to the northern hemisphere for spring and summer.

WHAT TIME IS TRUE NOON? The meridian plane is vertical precisely in the north-south direction, and is marked in Sunstones II by the MERIDIAN STONE. You can determine true "local solar noon" by watching the sunlight on the broad faces on the east and west sides of the Meridian Stone. Every day before noon (ante-meridian), the sun lights up the east face. After noon (post-meridian), the west face is sunlit. What happens at exactly "local solar noon"? This "noon" will normally not agree with your watch. These differences are a clue to the motion of the Earth, for they are linked to the varying speed and distance of the Earth in its orbit, carrying us around the sun. 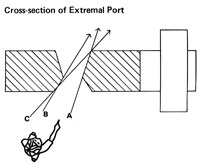 A CALENDAR FOR THE YEARS AND CENTURIES A biconical opening in the Meridian Stone, the EXTREMAL PORT, is the only feature of the Sunstones II that is not symmetric across the meridian plane. From our perspective on earth, the sun, moon, and planets set at slightly different places each night. The Extremal Port reflects this fact, for the angles of the Extremal Port indicate the maximum northerly and southerly setting points of the objects in our solar system. Here is how it works:

By standing on the east side of the sculpture and looking through the port along the sightline marked "A" on the illustration above, you will see the most northerly point at which the sun will set. This will occur at the summer solstice, the beginning of the summer (approximately June 21). Sightline "B" represents the most northerly position of moonset. The moonset moves from north to south and back every month. The range of that monthly motion changes from a minimum to a maximum in nine year cycles, and reached this maximum in late 1987. Sightline "C" indicates the maximum northerly setting of any planet in our solar system. Venus will set at this point in approximately 28,000 years. The nearly symmetric set of sightline, lookin south of west, determine the southerly extremes of the moon and planets and the winter solstice of the sun. An Extremal Port is possible only because the major bodies of our solar system are arranged on a narrow plane about the sun. This is a direct result of the way in which our solar system was formed. The positions of sunset and moonset demonstrate the motions of these celestial objects which must be understood to predict eclipses.